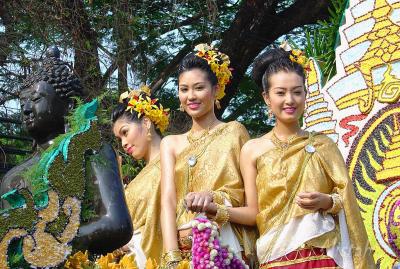 Almost every month there is a festival of some sort in Chiang Rai. It can be a Regional Culture festival, a festival around the Lynchee fruit or Loi Kratong.

Almost every month there is a festival of some sort in Chiang Rai. It can be a Regional Culture festival, a festival around the Lynchee fruit or Loi Kratong.  Or maybe the biggest of them Song Kran, the Thai New Year in April.

Chiang Rai Flower Festival are 10 days in end of December and beginning of January (Dec 26 - Jan 10). The colourful flowers of various kinds are on display in Chiang Rai amidst the breezy atmosphere of Kok River, near Chaloem Prakiat Bridge. The stars of the festival are tulips and Lilies. Roses, orchids and other temperate flowers are featured in the festival. There are also beauty pageant, flower processions, flower gardens, Lanna cultural performances as well as evening food market. A number of flower and plant stalls offer their products at reasonable prices.

King Mengrai the Great Annual Fair end of January and beginning of February. Chiang Rai was built/started by King Mengrai in January 1262. This event is to commemorate the establishment of the town. Lanna Buddhist ceremony is held on 26 January followed by school’s orchestra band, cultural performances. 10 day-Red Cross Fair is held after the ceremony.

Music & Arts Festival in October. This is a beautiful opportunity to appreciate arts and music amidst the natural beauty of Chiang Rai. The festival features music event, photo and painting exhibitions and special food fair.

The Map shows location of the Flower Festival